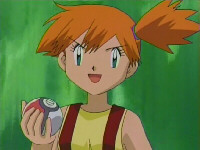 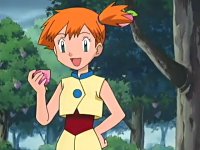 Misty, the youngest out of four sisters, has a massive fondness of Water Pokťmon. Growing up in Cerulean City, she was in the shadow of her three sisters at the Gym with their water pokťmon so she left to become the best Water Pokťmon Trainer there was. She met with Ash accidentally when Ash destroyed her bike when trying to protect Pikachu from a flock of Spearow. Joining him on his journey, Misty continued living the dream of hers to get as many Water Pokťmon and train them as possible. Misty started off being a bit of a hothead, knowingly attacking people for just the smallest comments, however in time, especially after becoming a mother figure to Togepi, she calmed down a fair bit. After travelling through Johto, Misty was called upon by her sisters to look after the Cerulean Gym while they went on holiday. Even when they returned, Misty continued being the Gym Leader and will continue to show her Water Pokťmon knowledge in the gym battles.

Misty has become the Gym Leader for Cerulean Gym, a position that only a few dozen people in the world hold.