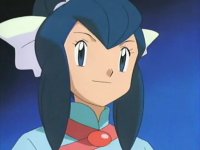 Liza is the co-Gym Leader in Mossdeep City. Liza is the eldest sibling in his family, and tends not to let Tate forget it. In battle, Liza is more experienced with Tate and shows this experience many times in training with Tate. However despite this sibling rivalry, Liza really cares for her brother and gets really worried when they are seperated.

Liza has worked up the ranks and become the Mossdeep City Gym Leader with her brother Tate.