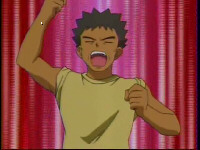 Flint, the father of Brock & Forrest, left the family in order to become a Pokémon Trainer, leaving Brock in charge of the family. However since he didn't become a successful trainer, he did not want to disappoint his family, so he didn't return and lived on the outskirts of town selling rocks. However when he met Ash, he eventually revealed who he was and returned home to become the gym leader. Flint is a kind guy who likes to help people in regards to Pokémon battle. After his wife, Lola, returns to the gym, he ends up becoming less assertive and lets Lola take over, until Brock intervenes. He currently looks after the gym with Lola and Forrest.