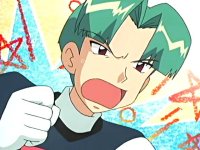 Butch is a member of Team Rocket. When he joined Team Rocket, he was paired up with Cassidy and a Raticate. More successful than their rivals Jessie & James, Butch & Cassidy are given the more high profile jobs for Team Rocket including several Breeding Center scams and many other tasks. Butch is a relatively calm guy, however since people keep mispronouncing his name, calling him Botch, he gets angry. He does have a bit of an elitist attitude, and the scams that he does usually go well, unless Ash & Co. wind up involved. For a brief time, he was teamed up with Jessie in Team Rocket.