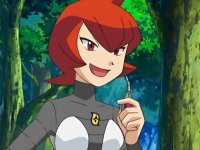 Hometown: ?, Sinnoh
First Appearence In Episode: The Charge of Team Galactic (Part One)!

Little is known about Mars due to her limited appearances, however like Saturn & Jupiter she is one of the commanders of Team Galactic and helped out in the extraction of the Adamant and Lustrous Orbs in Celestic Town