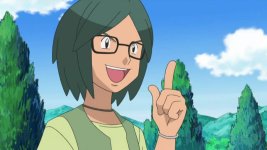 Conway is a Pokémon Trainer from Sinnoh. He first appeared during the Pokémon Tag Team tournament where he was partnered with Dawn. Conway is an incredibly intelligent trainer and often plans strategies ahead of time in order to make sure he has the upper hand in battle. He appears to have a crush on Dawn and often appears out of nowhere, startling Dawn in the process.

Conway has challenged gyms in Sinnoh and has earned eight badges. He ended up losing to Ash during the third round of the Sinnoh League