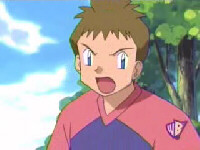 Harrison is a relatively experienced Pokémon Traienr from the Hoenn Region. After travelling through Hoenn, Harrison decided to go to Johto to try out his skills against Pokémon Trainers there. Harrison is a calm and collected person, and is very kind and eager to help out. When he arrived at the Silver Conference, he befriended Ash and helped stop a rogue Sneasel who was stopping access to the Sacred Flame. Once in the championships, Harrison battled to his maximum potential and got a very respectable poisitioning in it. After the championships, he decided to go to Kanto to battle the Gyms and the League