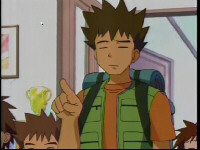 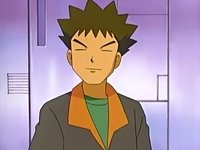 Brock, the eldest child in his family, started off looking after all of his younger siblings while being the Pewter City Gym Leader, a tough job indeed. However after meeting up with Ash, Brock met his father who ran off long ago and thus decided to travel with Ash on his journey while his father, Flint, took over the responsibilities of the gym and the family. Brock's main Pokťmon ambition is to become a Pokťmon Breeder and during his travels he has learned a lot about Pokťmon and their habits, especially during his tenure assisting Professor Ivy in the Orange Islands. Brock is a very flirtatious person and acts as a father figure to Ash & May, giving them advice and hints while in battle. He is also a good cook.
After the Sinnoh League, Brock started reconsidering his goal and decided to leave and train to be a Pokťmon Doctor.

Brock hasn't had any gym achievements but he has trained his Pokťmon well and been in a number of contests and races, all of which he's managed to do pretty well in.