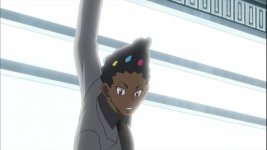 Grant is the Gym Leader of Cyllage City and is an avid climber. He focuses upon Rock-type Pokémon, which is reflected in one of his pastimes, rock climbing. In addition to running the Cyllage City Gym, Grant is known to participate in battles in the Battle Chateau which is where he first met Ash. Originally, Grant did not disclose his position until Ash challenged him.