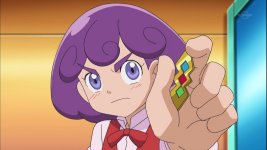 Burgundy is a Pokťmon Trainer and Connoisseur who is travelling the Unova region. She is a hot tempered and first met Ash when she offered to evaluate his Pokťmon, deciding to pick holes in them rather than praise them.. She decided to become a Pokťmon Connoisseur after Cilan defeated her in Striaton City gym, suggesting that she needs to be more in-sync with her Pokťmon. She vowed revenge and decided that she will outdo Cilan at being the connoisseur. She eventually returned to Striaton City and defeated Chili in order to earn a Trio Badge. She later participated in the Don Battle tournament in Nimbasa City.