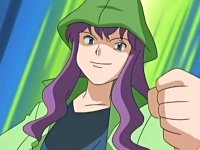 Hometown: Slateport City, Hoenn
First Appearence In Episode: A Cacturne For The Worse!

Harley is a rather flamboyant Pokémon Co-ordinator. While he is male, many of his mannerisms match that of a girl. Dressed like his main Pokémon, Cacturne, Harley is a talented Pokémon Co-ordinator and has won many contests and partaken in several Grand Festivals. When he met May, he offered cookies, but May's usual mannerisms made him think that May didnt want them. This started a long fued between him and May which continued when May kept defeating him in contests. Due to this, Harley uses whatever means necessary to try and make May fumble and lose including stopping her from registering for contests and loaning his Pokémon to Team Rocket.