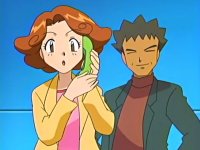 Hometown: Pewter City, Kanto
First Appearence In Episode: A Family That Battles Together, Stays Together!!

Lola, the mother of Brock & Forrest, left the family some time after Flint in order to become a Pokémon Trainer. However she ended up returning to Pewter Gym while Brock was on his travels in Johto. Having become more of an accomplished trainer than Flint, she decided to take over and completely redecorated the gym, making it a Water Pokémon Gym with herself as the gym leader. However Brock was not happy with this and challenged Lola to a battle in order to decide how the gym would stay. Brock wins this battle so Lola vows to stop trying to change the gym. Lola & Flint are now happily remarried and help run the gym together.

In the first episode, Brock & Flint described Brock's Mother as being dead. This however is clearly not the case, and could just be the statement of malice based on her leaving. However this was only in the dub of the show, she actually just left in the Japanese version.