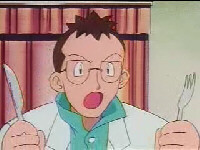 Professor Elm, originally a student of Professor Oak, is a renowned Pokémon Researcher in the land of Johto. Professor Elm has a habit of getting incredibly rapped up in his research that he is completely oblivious to his surroundings. When meeting up with his old mentor, he has been known to argue constantly about certain research elements. Elm is also known for going off on a tangent when talking to people and trainers, continuing on with examples of research in the area that the conversation is about. However Elm is a kind person and manages to make friends easily.

Elm is the head of the Pokémon Preservation Council and one of the most renowned researchers in the world.

Pokémon Given To Trainers